Rachael Simon is a trusted high-end flute repair specialist based out of Eastern Pennsylvania. She is Straubinger Certified, Muramatsu Certified, and her shop is the official Burkart Repair Center East, serving the entire East Coast and New England.  Rachael is known for her careful attention to detail, mechanical expertise, and relentless pursuit of perfection. She has repaired and maintained flutes for top professionals around the world, including instruments for Haynes, Powell, Burkart, Miyazawa, and Yamaha artists.

Rachael holds a Bachelor of Flute Performance degree from Miami University, where she studied with Randolph Bowman, Principal Flute of the Cincinnati Symphony Orchestra, and Dr. Sandra Seefeld.  Her other instructors include Dr. Sharon Winton of  the “President’s Own” United States Marine Band, Jennifer Northcutt, Assistant Principal Flute of the Dayton Philharmonic, and Dr. Rebecca Andres, Principal Flute of the Dayton Philharmonic. During her studies, Rachael’s love for the flute manifested into a love for the flute as a beautiful machine, and decided to devote her efforts to learning flute repair.  Rachael studied flute padding and mechanical overhaul techniques with Jonathon Landell, a master flutemaker and technician.

In 2011, Rachael went on to join Burkart-Phelan, Inc, where she worked for 6 years. In addition to developing working as a finisher and repair technician, Rachael studied advanced repair techniques with Lillian Burkart and Jim Phelan. Her capabilities extend to precision machining, wood instrument crack repair, plating, and beyond. Rachael was also in charge of quality control operations for the highly-regarded Resona product line during her tenure. She additionally maintained a private repair shop that serviced all makes and models, earning acclaim from regional professionals and instructors. In 2016, Rachael continued her pursuit of fine flute repair by joining JL Smith and Co. as a flute and piccolo repair specialist.  Her padding techniques and mechanical ability earned her a reputation for bringing flutes to their highest performance potential in both sound and feel. Rachael is also an accomplished flute repair instructor, and has had numerous students and apprentices go on to become top flute finishers and repair technicians.

Rachael now operates her own flute repair specialty shop in Doylestown, PA. She brings her dedication to the craft, finely-honed precision, and deep love for the flute and piccolo to every job.  Her passion is using her knowledge and skills to make each instrument a seamless joy to play for every flutist, whether professional, student, or amateur. 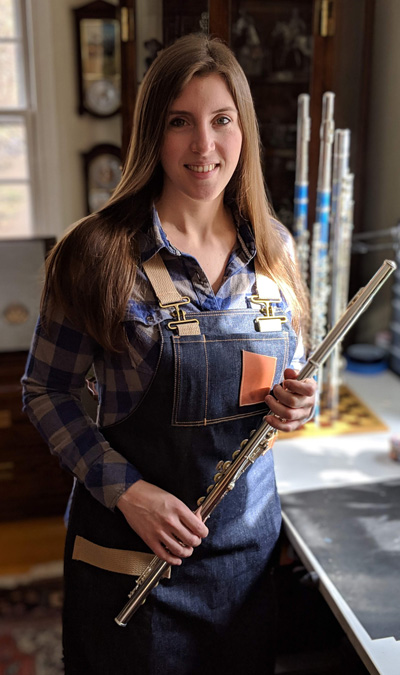